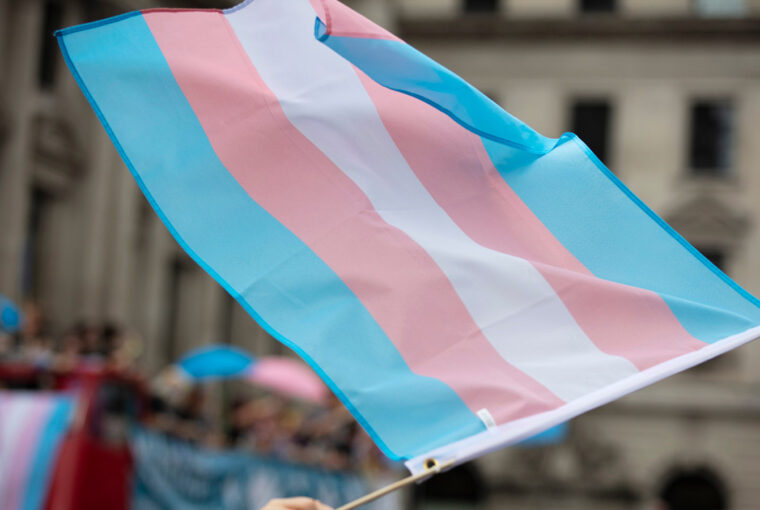 March 31st marks International Transgender Day of Visibility (TDOV), an annual day of awareness celebrating the lives, stories, and achievements of transgender, non-binary, and gender-expansive individuals. It all started with longstanding transgender activist and TDOV founder Rachel Crandall, who was frustrated the only well-known transgender day of awareness (Transgender Day of Remembrance) was centered around mourning the community’s losses. Citing the lack of recognition for transgender, non-binary, and gender-expansive people who are living, she initiated the first TDOV in 2009.

The significance of Transgender Day of Visibility varies for different people.

For Gemini*, a transgender poet and author, the celebration marks “the chance for people to see and recognize my humanity. It’s a reminder that my community is valuable and worthy simply for being ourselves.”

Leon*, a genderqueer educator, shared that while bringing awareness to transgender, non-binary, and gender-expansive communities is important, it’s not enough without allies committed to making the world safer and more equitable. “In my experience, visibility is hard. Especially as a Black trans man, visibility can put me at a greater risk of being harmed or scrutinized. I want to live in a world where I have both visibility and safety. So honestly for me, today is a loud call for cisgender allies to commit themselves to doing the hard but necessary work of contributing to safer communities where we have the opportunity and resources to thrive.”

Uplifting and amplifying the voices and narratives of transgender, non-binary, and gender- expansive individuals is important today in particular. But, it’s essential for allies to be intentional about acknowledgement, affirmation, support, and advocacy all year long-especially given the dramatic rise of harmful, anti-trans bills across the nation. Solidarity comes in many forms, including, but not limited to these actionable items:

And with that, we’re paying tribute to the influential work and accomplishments of four transgender, non-binary, or gender-expansive trailblazers who are paving the way for a more inclusive, joyful, and equitable future. 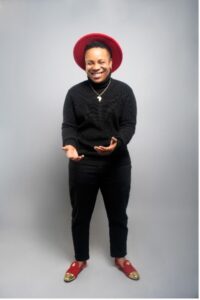 Khalia is the founder and owner of Sankofa Athletics, LLC, an athleisure apparel brand for athletes and non-athletes with the powerful mission of making a positive impact on the lives of others. The designs are inspired by modernized African patterns that highlight the African culture of countries like Ghana and Nigeria. While these captivating designs are distinguishing, equally notable is Khalia’s dedication to centering community, unity, and inclusivity in every element of Sankofa Athletics.

“Sankofa allows me to intertwine humanitarianism with the company because I’m an activist first. My tagline is philanthropy through fashion, activism through fashion. I’m able to highlight the work that other organizations are doing and partner with them, and at the same time, allow people to feel good knowing a portion of the funds from their apparel is going towards a community that needs the assistance.”

Sankofa Athletics, LLC has partnered with non-profit organizations like the Maasai Water Project and Lost N Found Youth to assist others in need of necessities like food, shelter, and clean water. Included in his purpose-backed apparel is a focus on representing the LGBTQIA+ community and people of color.

“It’s so important for athletes from the LGBTQ+ community to be highlighted. Within Sankofa, I have a collection that highlights the LGBTQ+ community and partners with an LGBTQ+ organization. I’m a trans, non-binary, Two-Spirit being, so it’s good for trans people to be able to see themselves represented in athletic wear that’s not only quality, but that gives back. We’re changing the game within athletic brands. We are the future.”

Raneem is the Co-Director of Girls Rock Cincinnati, a volunteer-run summer camp with the mission of fueling joy through arts and music for girls and gender-expansive youth. Born out of the need for a safe space where Cincinnati youth could experience agency and build community, Raneem uses their work at Girls Rock Cincinnati to create opportunities spanning creative arts skills-building, artistic expression, life skills, leadership, and mentorship, while creating social change.

“Our team is there to give campers a space to recognize their own agency. We are there to offer them, quite possibly for the first time in their lives, a space where agency is honored and valued first and foremost before anything else. We want them to experience what it feels like in their body to feel empowered, seen, and heard. We want them to pay attention to what that feels like, who they’re around, and what they’re doing when it feels like they have limitless agency, so they can keep recreating that outside of camp. We want campers to recognize their dreams and desires are possible.”

Recognizing the critical necessity of equitable access, Raneem and his team are committed to removing all transportation and financial barriers to Girls Rock Cincinnati, so every interested camper can rock, especially LGBTQIA+ and BIPOC youth.

“Knowledge is not a scarce resource. Access to high-quality education and arts education is a fundamental human right.”

Raneem also views music as a unifying vehicle for social change, illuminating how resistance and revolution through music offer possibilities for joyful existence.

“I firmly believe that the revolution is full of joy. When we think about resisting systems of oppression and the work we put into that, I think the image that comes to mind for a lot of people is boots on the ground protesting. That’s a very important aspect of resistance and revolution, but what I’ve realized through Girls Rock is that sustainable change happens in micro-interactions. Music has been a vehicle for social change since the beginning of humanity. So what Girls Rock focuses on is resistance in joy. Choosing to experience joy in spite of and in addition to the crises we find ourselves in is powerful.” 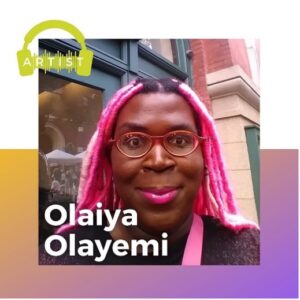 Olaiya is a writer, performance artist, filmmaker, sound artist, and teacher. She creates anti-disciplinary art that’s radical in its form and content with an emphasis on pleasure.

“My motivation for my work is to center pleasure as well as joy, particularly in the lives of womxn of the African diaspora. I tell stories about the intimate spaces of Black womxn’s lives, whether trans or cis, Afro-Cuban or South African, and how we move closer towards pleasure, in spite of institutions and systems.”

“I create characters that are radically themselves and people who have human experiences. They’re not just a statistic or what you might see within mainstream media. For instance, Black womxn are more than the funny best friend or the sidekick. I create characters that I just don’t normally see, so that’s something I’m proud of.” 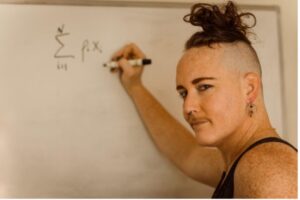 Juniper founded DAPPER Stats with the mission of providing tailored research support for science, while challenging and breaking down hierarchies of privilege and power within society. Much of Juniper’s research has centered around ecology and endangered species, however, after a pivotal moment they recently shifted their scientific interests to the environmental impact of chemical weapons which sparked their creation of The Chemical Weapons Research Center.

“In the summer of 2020 after the murder of George Floyd and Breonna Taylor and living in Portland, there was extensive protest[ing]. Through my experiences on the ground standing up for Black lives, I saw how police were not only harming people, but destroying the environment. As a scientist trying to lead positive change in whatever way I could, these events led me to realize no one was really paying attention to the environmental impact of these police tactics, and in particular, chemical weapons. So, I’ve gotten involved with developing research communities around these impacts.”

Juniper is also on the advisory board of 500 Women Scientists, a non-profit organization aimed at making science more open, inclusive, and accessible. In their role, Juniper helps cultivate strong partnerships and advises the development of public resources and pages on Wikipedia that represent the contributions of underrepresented scientists in science, technology, engineering, math, and medicine.

“It was surprising to me how few pages there were for people like me**, whether that was disabled scientists, trans scientists, or non-binary genderqueer scientists. There’s a push towards inclusion of women, which is a start, but there’s a huge need to break out of that mold. So, 500 Women Scientists has been a good force for pushing forward the narrative about who scientists are. And that’s been really powerful.”
To support Khalia, Raneem, Olaiya, and Juniper’s work, visit their websites and follow and share their work on social media. Also, consider volunteering your time or donations, if feasible, to their philanthropy.

*Name has been changed at their request

**While, Juniper doesn’t like to identify their gender, they pragmatically will in moments that makes sense to them.

Quiz: Which Men’s Product Suits You?

MPH, PhD
Dr. Deana Williams, MPH, PhD (she/her/hers) is a sexual and reproductive health researcher at the Center for Sexual Health Promotion at Indiana University. Her research calls attention to systemic oppression and promotes the health and well-being of communities that are historically underserved. Dr. Williams’ specific research interests include health equity, racial justice and healing, queer liberation, diversity and inclusion within sexuality education, and the health and well-being needs, experiences, and strengths of LGBTQ+ communities of color. She has authored and co-authored multiple scholarly publications on health disparities and the social determinants of health. In addition to her work at Indiana University, Dr. Williams is an advisory board member for the HIV League, the only non-profit organization in the US that provides scholarships to students living with HIV. Dr. Williams has taught sexuality education for nearly a decade in collegiate, community, and clinical settings. She has also worked on several gender equity and sexual violence prevention and education initiatives spanning the Midwest as a skilled trainer, program planner, and workshop leader. She holds a Master of Public Health and a doctorate in Health Behavior from Indiana University.