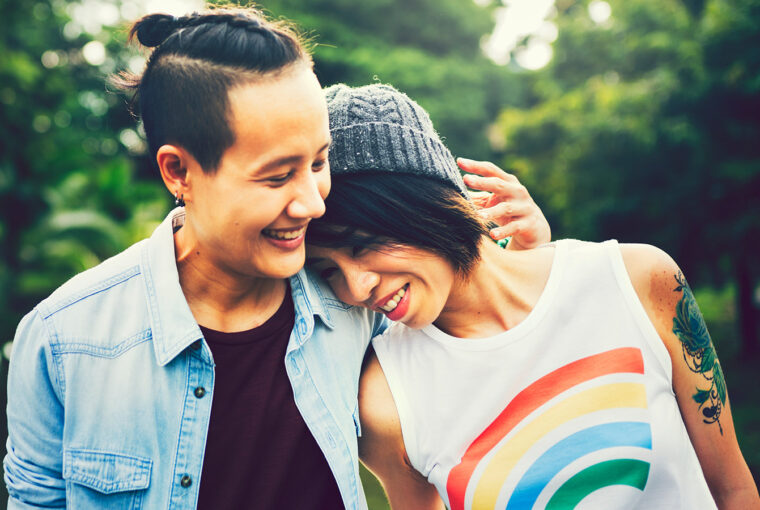 It’s no secret that sexuality education is shamefully inadequate (and in many cases non-existent) in American schools. Not to mention, when formal education systems do have sex ed, it’s often hetero and cis normative, completely excluding LGBTQIA+ folks from learning affirmative and applicable information about their bodies, relationships, reproductive decision-making, and pleasure. The result? LGBTQIA+ folks are left with many unanswered questions about their sexual and reproductive health. Then, harmful and stigmatizing myths and misconceptions spread like wildfire. So, let’s set the record straight about some of the most common myths and misconceptions around LGBTQIA+ sexuality.

Myth: Only LGBTQIA+ people are impacted by HIV.

Fact: While some groups within the LGBTQIA+ community are disproportionately affected by HIV, anyone can get HIV regardless of sexual orientation, gender identity, race, or age.

Referring to HIV as an “LGBTQ+ problem” is medically untrue and perpetuates damaging stereotypes about people living with HIV and the LGBTQIA+ community. These stereotypes also fuel the myth that some groups within the queer community have higher rates of HIV as a result of their sexual or gender identity. In fact, discrimination and social inequities fuel this increased risk for HIV.

Myth: All pregnant people are women.

Fact: Not everyone with a uterus and a vagina identifies as a woman. People of many gender identities and expressions might experience pregnancy, including individuals who are transgender men, non-binary, genderqueer, or otherwise gender-expansive. Folks who are gender-expansive often face multiple barriers to access safe and inclusive healthcare, especially when it comes to reproductive and gynecological services. When advocating for reproductive rights and reproductive health, we need to ensure people of all genders have affirmative and equitable access to pregnancy options, birthing care, and parenting resources.

Myth: Only cisgender women are able to breastfeed/chestfeed.

Fact: It’s possible for milk production to be induced for people of all gender identities, including individuals without a uterus and non-birthing parents. People of all genders have some amount of prolactin and oxytocin, the two hormones responsible for milk production. The process of inducing milk involves stimulating and draining the breasts/chest through pumping or manual expression several months before the baby’s due date. The American Academy of Pediatrics recommends using the term “chestfeeding” when working with gender-diverse families. Some parents also supplement this technique with additional pregnancy-stimulating hormones to prepare for milk production. Though some folks may produce a full milk supply, milk production will vary from person to person. For instance, gender-diverse parents who have undergone gender-affirming procedures that impact their breast tissue might have difficulties producing milk. Guidance from a gender-affirming lactation consultant or provider is critical for discussing lactation options and creating an individualized plan.

Fact: The bisexual+ community is diverse (bisexual+ is an umbrella term that includes all individuals who experience attraction to more than one gender). Are some bi+ people non-monogamous? Yes! Are some bi+ people monogamous? Also, yes! Bisexuality and non-monogamy are different. Just because a person identifies with one doesn’t mean they automatically identify with the other. Assuming that all bisexual+ people are non-monogamous stems from the stereotype that bi+ folks must always be in a relationship or be sexually involved with people of multiple genders simultaneously “to qualify as bisexual+.” This misconception is not only untrue, it’s harmful. No one has to prove their sexual identity to anyone and there’s no such thing as being “bisexual+ enough.” Bisexual+ people are #stillbisexual regardless of their sexual or romantic partner(s).

Multiple identities also fall under the asexuality spectrum. For instance, some people are demisexual, meaning they only experience sexual attraction once they’ve formed a deep emotional connection or bond with another/others. Others are grey-asexual, which means they feel sexual attraction sometimes, but sex overall may not be as important as it seems for others outside of the asexuality community. Ultimately, there’s no “one way” that someone might experience their sexuality within the asexual community.

For more information on the topics listed above, visit:

Blood Sugar and It’s Effect on Weight, Wrinkles, and Aging

MPH, PhD
Dr. Deana Williams, MPH, PhD (she/her/hers) is a sexual and reproductive health researcher at the Center for Sexual Health Promotion at Indiana University. Her research calls attention to systemic oppression and promotes the health and well-being of communities that are historically underserved. Dr. Williams’ specific research interests include health equity, racial justice and healing, queer liberation, diversity and inclusion within sexuality education, and the health and well-being needs, experiences, and strengths of LGBTQ+ communities of color. She has authored and co-authored multiple scholarly publications on health disparities and the social determinants of health. In addition to her work at Indiana University, Dr. Williams is an advisory board member for the HIV League, the only non-profit organization in the US that provides scholarships to students living with HIV. Dr. Williams has taught sexuality education for nearly a decade in collegiate, community, and clinical settings. She has also worked on several gender equity and sexual violence prevention and education initiatives spanning the Midwest as a skilled trainer, program planner, and workshop leader. She holds a Master of Public Health and a doctorate in Health Behavior from Indiana University.